There are a fair amount of spoilers in this post; if that’s a concern, click on the provided link to see what films I’ll be talking about.

This weekend I attended [most of] the 10th annual Music Box of Horrors, a 24-hour marathon of horror films from across the world and history of film.  It’s only my second time attending, and it’s been great fun both times.  Instead of doing a separate post for each movie– which would take a long time and I am so very, very tired– I’m opting to give a brief rundown of fat representation in this year’s lineup, to document my experience as a fat audience member.  For extra fun, I’ll include my favorite moments of misandry, as I was pleased to note that a good number of the movies in this year’s lineup had interesting and kickass female characters.

The Man They Could Not Hang (1939, dir. Nick Grinde): we skipped all but the last 15 minutes in the interest of getting lunch, but no fat people in the part I did see.

Cat People (1942, dir. Jacques Tourneur) no fat characters.
Misandry Moment: slimy psychiatrist refuses to stay friendzoned by his patient (ick), she turns into a panther and mauls the crap out of him.

The Curse of the Werewolf (1961, dir. Terence Fischer) Leon, the main character, has a fat best friend.  Jose is his cheerful, hedonistic coworker; he suggests that the two of them spend their wages at a brothel.  Unfortunately, Leon turns into a werewolf and mauls the crap out of him. 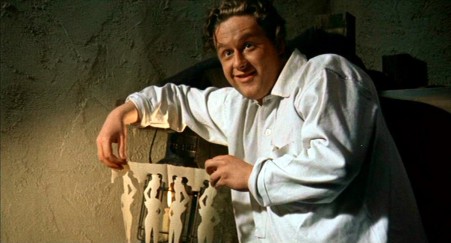 The Borrower (1991, dir. John McNaughton) in a group of potentially victimizable young people:  a heavy metal (I guess) band is shown filming a music video of a song about how they want to kill their parents.  The fat lead singer is an egomaniacal bully; when they hear the neighbor’s dog barking, he goes out to the backyard and sprays it down with the garden hose, laughing all the while.  However, the neighbor’s dog is actually the titular serial killer alien, who kills the fat lead singer.  (This was a weird one.)  His bandmates survive unharmed, while…
Misandry Moment: …the young person who has their shit together enough to load a gun and blast a hole in the baddie is the band’s camerawoman.  Also at least three scenes of a female cop shooting and beating up a rapist.

Nosferatu the Vampyre (1979, dir. Werner Herzog) no fat people.
Misandry Moment: this film follows the classic Dracula story, except that Lucy is the one who is solely responsible for killing the vampire, while Dr. Van Helsing is a skeptical milquetoast.

I went home for a few hours’s sleep, but stalwart Patrick stayed the whole night.  His not-entirely-awake testimony is as follows:

Nightmare, aka Nightmares in a Damaged Brain (1981, dir. Romano Scavolini) no fat people.

Don’t Look in the Basement (1973, dir. S.F. Brownrigg) Takes place in a psychiatric hospital; some of the patients are fat.

The marathon also plays shorter pieces in between the features; a short at one point overnight there was a screening of “Space Werewolf”, which features a fat protagonist.

I returned for the last two features:

Just Before Dawn (1981, dir. Jeff Lieberman)  My cup runneth over.  The bad guys are fat psycho hillbilly twins, terrorizing and murdering a group of sexy young campers.  The sexy young campers are given harbingers in the form of a large-bodied park ranger (George Kennedy) who eventually comes to their rescue, and a hillbilly family comprised of a friendly but shy waif daughter, a hostile old dad, and a fat mom in an ill-fitting dress who isn’t given much to do except remind the audience that hillbillies are grotesque, I guess?  The first killer twin to die is shot by Ranger Kennedy and falls on top of the Final Girl who he is attacking, leading some of the audience to vocalize disgust.  It’s pretty gross to have a bloody corpse fall on you, but I feel like the disgust factor was heightened by the fact that the corpse in question is a fat man who looks like he hasn’t bathed in a while.
Misandry Moment: the Final Girl rams her fist down the second killer twin’s throat and chokes him to death while her traumatized boyfriend cowers in the background.  One of the campers is murdered after he mansplains a rope bridge in the forest to the girl who lives in the forest and has presumably had her entire life to figure out the rope bridge.

There weren’t any surprises as far as representation of fat people goes.  While nothing was grossly fatphobic, most of the films didn’t incorporate fat characters, and the fat characters that did appear were pretty typical, and in small supporting roles.  Hopefully I’ll end up seeing a horror film with a meatier (ha) role for a fat person that I can write about before Halloween; if I have to resort to writing about Tucker and Dale vs. Evil, one of my favorite horror films, so be it.

Behold: Ian Larsen’s supercut of shouting, bellowing, and howling fat men from early Coen Brothers films, from Blood Simple up through O Brother, Where Art Thou.  It probably will not surprise Coen Brothers fans that most of the video is John Goodman, but hey, I’m not complaining.

True Stories is a visit to Virgil, a small town in Texas where characters and situations are based on tabloid stories David Byrne collected while on tour and interwoven with songs like “Wild Wild Life” and “Puzzlin’ Evidence.”  This movie features John Goodman in one of his earliest roles, playing country bachelor Louis Fyne with a finely tuned balance of vulnerability and amiability.

Louis makes his size part of his identity, through the lens of bearishness.  At the night club, he refers to himself as “Louis the Dancing Bear;” this self-appointed nickname is reflected on his date with the Cute Woman (Alix Elias).  He describes his body, in a phrase you may have heard before, as “a very consistent, panda bear shape.”  There isn’t shame or self-hatred in this label; rather, Louis seems to use it to describe his size in relation to masculinity and vigor (as evidenced in the nightclub scene).  There isn’t an overt connection to the bear identity used in gay male subculture, but the sentiment is not dissimilar.

Similar to Maurice from Secrets and Lies, Louis is largely defined by emotions and creativity.  He is a snappy dresser, a singer/songwriter, and “just [wants] to be loved.”  He is preoccupied with finding a wife and settling down; we see him on dates with several mismatches throughout the movie.  We don’t see his size as a detraction from his potential as a husband; these connections don’t last due to personality or lifestyle differences.  There is one scene that depicts Louis’ relationship with a yogini, but since the movie was filmed in the 80s before yoga had become normalized the way it is today, I’m assuming that the humor in the scene is more based on his girlfriend being a hippy weirdo than on his inability to do yoga (likewise I assume that someone struggling with a yoga position was still a fresh joke at the time).  His quest for a bride goes to extremes: he makes a television commercial advertising himself as an eligible bachelor and enlists the spiritual help of a Vodou practicioner (Pops Staples) to help him find love.

(Quick sidenote about the aforementioned scene:  There are certainly many more insensitive and inaccurate portrayals of Vodou in American cinema, but its inclusion feels shoehorned in to make use of the song “Papa Legba.”  I don’t know enough about Vodou to talk about how authentic the ritual scene is, but considering that Papa Legba is associated with crossroads, travel, and communication, I’m skeptical.  To its merit, it does, along with the “Puzzlin’ Evidence” preacher, undermine assumptions about the homogeneity of religion in small town America that viewers would likely otherwise make about the film’s setting.)

Louis is a character of excess, but instead of making him an outlier or moral lesson, this trait fits him in perfectly with the other characters in the movie.  Swoozie Kurtz plays a woman who is so lazy she elects to spend her life in bed watching tv.  In one scene, the Narrator (David Byrne) has dinner with the Culvers, a well-to-do married couple who have not spoken directly to each other in years.  Slothfulness and social maladjustment are usually attributes of fat characters, turning them into buffoons and isolating them from the thin characters around them, but none of these characters are fat.  Virgil is a community that is united in its paradoxically banal weirdness.

This unity is further evidenced in the group lip-sync that is kicked off by an energetic fat woman in a fierce yellow jumpsuit, and the fashion show that seamlessly includes fat people who model everything from business suits to powder blue formal wear to vegetation.  These scenes also incorporate age and racial diversity in a low-key way; this just happens to be a small town where different people come together to share their love of modeling grass suits and pretending to sing.

True Stories is about a community, but if one had to choose a protagonist, Louis is the most likely candidate.  The Narrator joins the audience in outsider status, learning about Virgil’s inhabitants through the course of the movie, but the detached quality of Byrne’s performance and details such as the self-aware fakeness of his driving scenes render him as an abstraction, a lens through which we can gaze at the town.  Louis, on the other end of the spectrum, is more human than the other characters.  In a movie that embraces performance and artifice, the most grounded moment comes at the end of Louis’ date with the Cute Woman, where they put aside their small-town geniality and admit that they aren’t making a love connection:

Goodman’s performance and Louis’ character relative to the other citizens of Virgil make True Stories stand in contrast to many films where fat people are depicted with the intent of rendering them as less relatable or sympathetic to the audience than their thin counterparts.

A few things I’m still pondering:  to what extent is Louis an embodiment of Virgil?  Is his size connected with perceptions of Virgil as a cookie-cutter small town USA, the ugly American stereotype that often comes packaged in a big body?