It sucks that film criticism is a dwindling profession (and that I didn’t make life choices to result in it being my career), because I could live at film festivals.  I don’t do conventions, but I imagine that I like film fests for the same reason– it’s comforting to be in a space where everyone is excited for the same dorky reason that, in the harsh wilderness of the outside world, you feel relief if someone from the general population even knows what the heck you’re talking about.  And when there’s the opportunity to be in that space for two solid weeks? 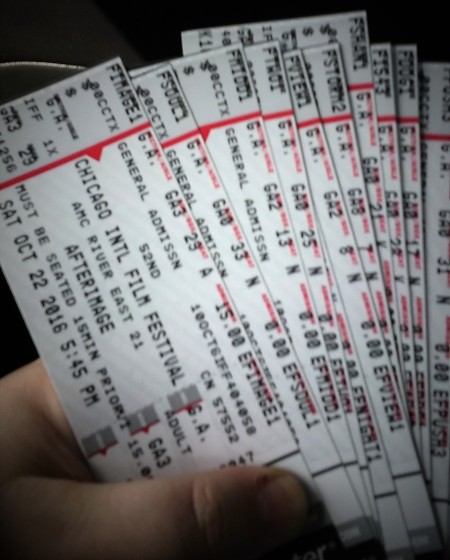 Well, that hasn’t been my experience yet, partially because I haven’t had the vacation time or the money for tickets, and partially because the first weekend of the Chicago International Film Festival (ChiFilmFest) is always the same weekend as the Music Box of Horrors.  But this year, finally, I had the opportunity to spend two solid days and then some at ChiFilmFest.  I skipped over the high profile entries that are going to be in theaters soon anyway (although I am looking forward to Moonlight, La La Land, The Handmaiden, and Arrival) and instead went for stuff that I’m not sure I’ll be able to see a second time, let alone in a theater: locally made indies, foreign films, shorts.  I don’t think I caught the breakout film of next year; the movies I saw ranged from underwhelming to pretty damn good.  I caught some interesting director Q&As, was part of the first audience in the US to see Andrzej Wajda’s final film, and got an obscene amount of free refills from the soda fountain at the concession stand.  The list of all the films I saw at ChiFilmFest are here.

The characters I saw were in wide variety, from an irrepressible Tibetan goatherd in Soul on a String to a closeted Quebecois track runner in 1:54.  There weren’t many instances where I was specifically impressed with representation of historically marginalized groups– notable exceptions were Pushing Dead‘s depiction of a person living with HIV/AIDS; the nuanced meditation on a young woman’s sexual agency in The View from Tall (cn: sexual harassment); and the rediscovery of black country blues artists during the 60s folk revival and its parallel to the civil rights movement in Two Trains Runnin’. And while there were some fat characters included in the 13 films I saw, none really stood out as anything different than the kind of representation I’ve grown accustomed to, unfortunately.  Here’s a quick rundown of them.

An animated short that could be most simplistically described as a surreal world made up of two warring societies of men and women.  I’m not going to pretend that I understood what the film is trying to say, but it was cool to see characters drawn in a variety of sizes and shapes.

A magical realist murder mystery and allegory about historical responsibility, in which one Austrian family’s entire history comes to visit on the same night.  A notable fat character is a blowhard World War I-era police chief who is more concerned with maintaining rule of law than he is with bringing about justice.

A biopic of the final years in the life of Polish abstract painter Władysław Strzemiński and his losing struggle against the government-mandated rise of socialist realism in art in post-WWII Poland. There was another line-towing fat police officer, a relatively small part.

Cute, funny heist movie that, not unlike a Coen Brothers film, has a lot of quirky bit parts embodied by fat people, including an obnoxious department store manager, a mob heavy who asks the guy he’s trying to intimidate if he can use his bathroom, and a socially awkward guy who just wants to buy some drugs.

A black comedy that reminded me a bit of last year’s submission Entertainment, this film stars Jim O’Heir (Jerry from Parks and Recreation) as an overly-optimistic square headed to Las Vegas to fulfill his dreams of being a standup comic, but gets waylaid when he makes a bloody pact with a mysterious stranger.  (O’Heir joked during the Q&A afterwords that he would have been off the project if they were able to cast Jonah Hill.)  He’s the only fat character on the screen, but another fat historical figure is invoked.  And as temptation is a big theme in this movie, I want to tell you how I avoided what could have been the most obnoxious “well, actually” moment of my life thus far:

At the screening, writer/director Ned Crowley and Jim O’Heir were in attendance to do a q&a. There’s a scene in the film where a character has a speech that uses a historical anecdote to illustrate a point. The anecdote in question was the story of Fatty Arbuckle raping a woman at a party with a champagne bottle so severely that she died from the resulting injuries.

Now, I don’t have a time machine, but I do know that contemporary film historians largely agree that Fatty Arbuckle was not guilty of this crime and unjustly crucified by the media and resulting moral panic. And one of the reasons I know this is because I’ve read the essay “Roscoe Arbuckle and the Scandal of Fatness” by Neda Ulaby, which is included in the essay collection Bodies Out of Bounds: Fatness and Transgression (ed. Jana Evans Braziel and Kathleen LeBesco), which I happened to have brought with me to the theater to read in between films. Plus I was sitting in the front section of the theater, so I both literally and figuratively could have thrown the book at the screenwriter. But I’m too classy (or is it spineless?) to do such a thing.