I was skeptical of at first, due to Melissa McCarthy’s last few films receiving mediocre ratings, but I’m happy to report that Spy gloriously exceeded my expectations.  Susan Cooper (Melissa McCarthy) is a smart, capable CIA agent who has spent her career at a computer, doing support work for her suave partner Bradley Fine (Jude Law), who goes around the world on glamorous field assignments.  After she sees villainous Raina (Rose Byrne) kill Bradley and brag that she knows the identity of all of the CIA’s active spies, Susan goes undercover to avenge her fallen partner and prevent Raina from selling a nuclear weapon to terrorists.

Spy is a great summer film.  I saw it this afternoon, and my throat is still sore from laughing so hard at the panoply of hilarious performances, with McCarthy as the leader of the pack.  I was notably delighted by Miranda Hart as Susanne’s gawky wingwoman Nancy, and Peter Serafinowicz, whom I recognized from his antagonistic straight man roles in Edgar Wright’s Spaced and Shaun of the Dead, as a relentlessly sleazy Italian agent.  The action scenes are thrilling without being overblown, and the two hour run-time flows by easily with spirited energy.

Spy is a highly entertaining action comedy that knows its limits, but does more than enough within them.  This factor alone makes it a notable improvement over Tammy, last summer’s comedy offering starring McCarthy.  Tammy has plenty of funny moments and empathizes with its fat, ill-mannered, working class protagonist as much as it throws obstacles in her path, but doesn’t do a very graceful job of balancing its goofy, vulgar humor with the more serious aspects of the story, such as Pearl’s (Susan Sarandon) self-destructive behavior, and the moments of emotional honesty and vulnerability do more bogging down than adding depth.  Which sucks, because there is an inherent transgressive joy to see two characters who would be pushed to the sidelines in most films leaving their stagnant lives behind in search of adventure. 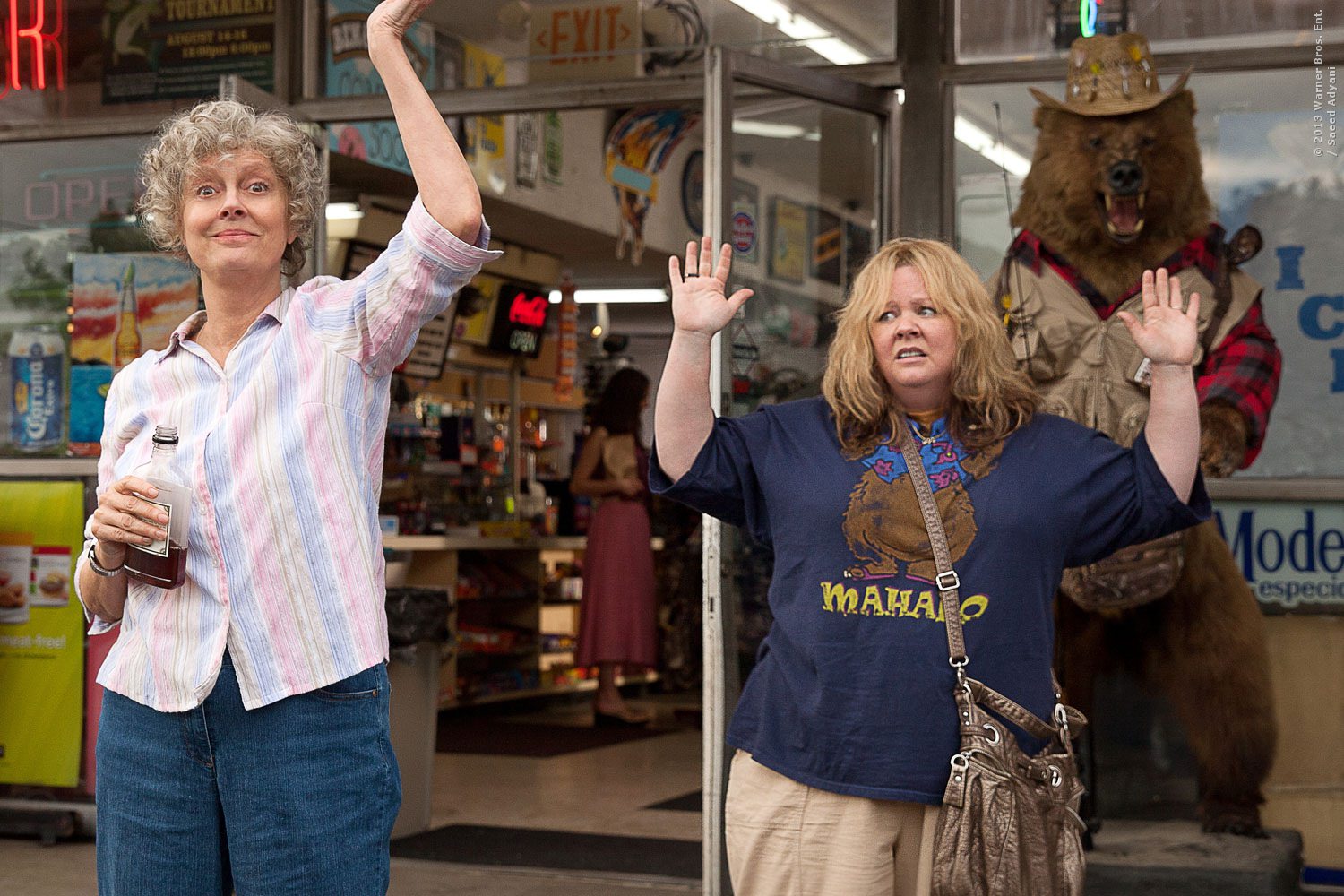 By virtue of being an action film, as opposed to a road trip film, Spy doesn’t have the expectation of character development or emotionally laden moments.  Even so, Spy doesn’t shy away from the pathos Susan experiences as a fat misfit.  Despite being a multi-talented agent, Susan experiences multiple microaggressions related to her fatness that impact her confidence.  Bradley uses his advantageous position, as her mentor and her crush, to convince her that she isn’t suited for field work.  He treats her with condescension, gifting her a cartoonish cupcake pendant to thank her for her help.  There is no way a sophisticated globetrotter would think of something so tacky as an appropriate gift for someone he respected as a peer, whether or not he had romantic feelings for her.  She is only inspired to volunteer for a field assignment when her boss (Allison Janney) says that they need an operative who is invisible.  Susan is invisible, as she works in a world where anyone who matters, especially any woman who matters, is thin and chic.  Insulting banter is a large chunk of the film’s humor, and there is a recurring theme of characters criticizing each others’ style choices.  Even though Susan is never directly insulted for being fat, she is at an automatic vulnerability for the contempt of her peers and antagonists because her size prohibits her from dressing fashionably.  In the beginning of the film, she puts Bradley on a pedestal, admiring his tailored suits.  “This shirt doesn’t even have a label,” she says of her own blouse, in self-deprecating comparison.  The false identities she is given speak to how her appearance deems her to have a boring, pedestrian life: a single woman with 10 cats, a divorced mom of 4.  Even her fancy spy gadgets are stripped of any glamorous aspects that would accessorize her thinner colleagues, such as an all-purpose antidote disguised as a bottle of stool softeners.

Compared to Tammy, the audience has less of a challenge in sympathizing with Susan.  Susan is impressive.  She holds her own in a field that demands over-achievement: she is a skilled fighter, focused under pressure, and has incredible attention to detail and analytical ability.  Tammy can’t haul herself over a low fast-food restaurant counter, has a hair-trigger temper, and doesn’t know who Mark Twain is.  Like Susan, Tammy struggles with a lack of regard from other people, but this is shown to be partly due to her abrasiveness (which she readily admits).  It would be easy to dismiss Tammy as a fat stereotype engineered for crude laughs, but we could just as easily criticize how Susan is written as overly idealized, as her flaws-that-aren’t-really-flaws (she doesn’t know how to act in a fancy restaurant, just like you in the audience!  She struggles with a lack of confidence that she quickly finds via a sexy international espionage adventure!) pale in comparison to how kickass she is.  However, both characters offer different ways of depicting how fat woman are marginalized.  We witnesses that marginalization on-screen in Spy, as Susan is belittled even though she does everything right.  However, when confronted with Tammy, we struggle with that marginalization in our own reactions to its titular protagonist.

So here’s the deal: I’m wrestling with my desire to see Tammy.

On one hand, I think Melissa McCarthy is great and her star status never fails to put a little sunshine in my day.  I’d like to support a film that she not only starred in, but co-wrote.  It’s rare to see a film where a fat character is written by the person portraying them.  (The example that immediately springs to mind is the British TV series Gavin and Stacey, written and acted by James Corden and Ruth Jones, complimenting each other as unstoppable force/immovable object sassy fat best mates of the nice normal title characters.  I digress.)   On the other hand, I currently need to budget my trips to the theater, which I’d rather use to focus on imaginative visuals (i.e. Snowpiercer) and movies I’ve been anticipating for a while (i.e. Boyhood).  Luckily, there are professional film critics who have been compensated for seeing Tammy, due largely to the fact that they are much better at this sort of thing than I.

Nathan Rabin of the Dissolve declared, “a crowd-pleasing, proudly working-class celebration of large women, old women, broke women, and women who love women,Tammy isn’t just consistently funny and unexpectedly touching and tender, it’s also genuinely subversive.” Today’s roundtable discussion at the same site about women in comedy was generally amiable towards it as well. The critical reviews (beyond the website where I daydream about being friends with most of the writers, that is) have been on the negative side of mixed, with a current Metacritic score of 39.

Teo Bugbee’s piece in the Daily Beast doesn’t afford Tammy commendations the same way that Rabin’s review does, but it does provide a smart analysis of Melissa McCarthy’s celebrity and career, looking specifically at the concern trolling directed towards her:

Sookie [McCarthy’s character on Gilmore Girls] was a “good representation” of obese women. She is also entirely unfeasible as a lead character. Her relative lack of drama made her perfect as a sidekick, but a show or a film structured around Sookie St. James would be like making a movie about Robin with no Batman. What’s the point?

The nastiness masquerading as concern is always present around McCarthy, policing her body in ways that her films never even come close to suggesting. If these concerned citizens were really upset about Hollywood’s mistreatment of actresses, they’d only have to look to McCarthy’s left to find Susan Sarandon, amiably stranded as a grandma in Tammy because Hollywood has no clue what to do when faced with a woman who’s just as volcanically sexy now as she was 40 years ago.

No, the distress of McCarthy’s fans has very little to do with women’s roles, and everything to do with distaste for working-class women and their bodies.