As I said in my previous post, 2015 was a great year for films with female protagonists.  We saw a whole range of diverse characters and situations, from The Assassin to Tangerine, Girlhood to Iris.  I also didn’t realize until I looked back at my blog posts from the past year that it was also the year of the female character right here on CPBS.  Starting the year out with Ma Rainey in The Ox-Bow Incident, the majority of the films I wrote about had fat female characters worth talking about. It shouldn’t be surprising that the role of body size in beauty standards was a recurring theme in many of these films.  Fatness is a complicated topic, but attractiveness is undeniably a factor in how it is considered.  Many fat characters, especially women, are contrasted against a conventional idea of feminine beauty.  That beauty can manifest as another character, perhaps the most explicit example being The DUFF, or the contrast between Anais and her sister in Fat Girl.  Often, a character is being measured against an ideal (eg. Emily in In and Out, who is hellbent on achieving her fantasy of being a skinny bride) or expectation (eg. Fat Amy in Pitch Perfect, who subverts the presumption that the acapella group she is part of is made up solely of “twig bitches”).  Even settings where a seemingly foundational social norm is rebelled against usually keep other hegemonic ideals intact, such as the gay community and household in The Birdcage where Albert feels devalued and ostracized both because of her size and gender expression.  The unifying factor is a standard that has transcended agreement to become common “knowledge,” a fabricated rule that causes bona fide unhappiness when characters are deprecated in this way, which can even impede their ability to achieve their goals.  Consider Susan’s outlandishly frumpy secret identities in Spy, which both make it difficult to blend in and communicate the lack of respect her coworkers have for her.  In all of these cases, fat women characters face difficulties due to their bodies’ lack of social value.  They are all deemed less valuable than their peers based on their bodies. As these characters embrace and/or prove their personal worth over the course of the film, the social fabrication of these standards and adherence to them are shown to be mutable and hollow, more of a hindrance than a motivation or guide.

Recently, I saw a film that illustrated this same idea, but rather than providing a fat character to root for, the focus is on the ridiculousness of the figures making these judgments.  Milos Forman’s 1967 farce The Firemen’s Ball skewers the inept bureaucracy of communist Czechoslovakia.  Despite this specific intention, its observations can be mapped onto structures of control in other contexts where authority is suspect.  The film’s humor is derived from the ineptitude of a company of firefighters organizing a ball for their community:  the cursory reasoning that informs their decision-making, their selfishness and pettiness, their expectations juxtaposed with their hapless inability to control the unfolding and increasingly chaotic events of the evening. 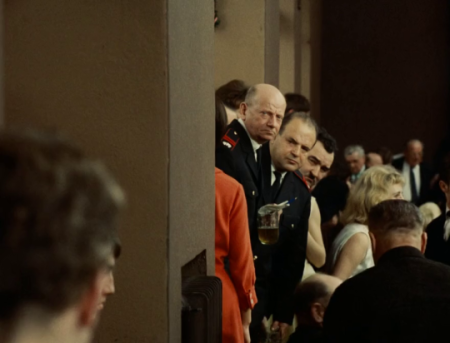 As the ball begins, the Entertainment Committee (it should be noted that all the firefighters in the film are middle-aged men) is in a room separate from the festivities, crowded around a magazine photo of contestants in an international beauty pageant.  They make up a typical boys’ club, crowded together with pints of beer and cigarettes, arguing about the logistics of the beauty pageant they intend to run during the ball.  They “sensibly” arrive to only allowing the eight “most beautiful” young women at the ball to participate; the one crowned beauty queen will have the honor of presenting a gift to the elderly former chairman of the fire department.  This subplot puts the male gaze in front of the camera, under the guise of carrying out an official ranking of beauty as entertainment.  The results are hilariously uncomfortable.  Subsequent scenes feature three committee members approaching young women with the dubious honor of having been selected as pageant contestants as they carry out their self-appointed duty with an undercurrent of embarrassed self-awareness at how boorishly they are acting with the most paper-thin of excuses.  They argue about how to judge which women are the most attractive: by their breasts, faces, or legs.  They skulk around the edges of the dance floor and peer at women from the balcony.  The women they approach largely react with confusion, and the committee awkwardly tries to filter out undesirables who are nominated by proud parents or foolishly assume that a means of entertainment at an event would be open to anyone interested.

The squeamish licentiousness of the beauty pageant takes place in a room separated from the ball, where many more firefighters than the entertainment committee are gathered behind a table to inspect the contestants as they rehearse.  Even if the “judges” of the pageant tell themselves that they are acting for the good of the event, the reactions of the young women’s parents suggest that they aren’t fooling anyone.  A mother of one of the young women escorts her into the room and cheerfully insists on staying to “find out what it’s all about,” to the dismay of the firemen (who eventually get her to leave by electing one of their ranks to ask her for a dance).  One man begs the committee to include his daughter Ruzena, a larger-bodied girl than the other contestants.  Her father tries to poke his head in the door every time it opens, despite having begged them to make her a part of the pageant.  A second father bursts in and drags his daughter from the room, telling the entertainment committee that they are “dirty old geezers.”  This illustrates the paradox of being considered a beautiful woman in a patriarchal system: the desire to be attractive paired with the anxiety over attraction leading to trouble. 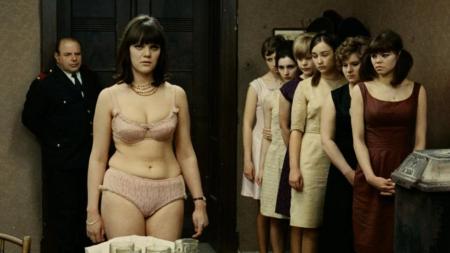 The artificial nature of the beauty pageant was, in my experience, made further obvious by a lack of context.  Forman probably wasn’t taking the reception of his film 50 years down the line into consideration, but as a Millennial raised on Hollywood, it was difficult to determine how I was expected to judge these women’s looks.  Against expectation, the events leading up to the beauty pageant rehearsal do nothing to clue the audience into which of the women is supposed the be the belle of the ball.  The entertainment committee approaches several girls in the beginning of the movie who aren’t part of the final eight; one appears very drunk, another very disinterested.  A young woman (whom I found attractive) is randomly grabbed from the dance floor and recruited; she complains that she wasn’t actually chosen.  What we really have to go off is the reactions of the firefighters.  For instance, I thought Ruzena was rather pretty (she looks a bit like Molly Ringwald), but after she enters the rehearsal room, one fireman assures another, “Don’t worry, they’ll improve.”  His opinion is also complicated by an earlier scene where Ruzena has sex with her dance partner; even if the committee doesn’t find her attractive, she is desired.  As a viewer, I was relying on the literal male gaze to understand the dynamics of the scene, who I was supposed to see as attractive and who wasn’t desirable.  This gaze is, unsurprisingly, reflected by the camera, with shots that follow the leers of the entertainment committee and focus on eroticized body parts while they assess the female ball attendees.

The commencement of the pageant serves is an effective tonic for the underlying creepiness of the rehearsal scene.  The entertainment committee’s authority over the beauty pageant– indeed, the structure of the beauty pageant itself– quickly erodes.  The contestants are reluctant to parade up to the stage; first one, then all of them, run off the dance floor and seek sanctuary together in the ladies’ room.  Once they begin to run off, chaos breaks out.  The audience, chanting “we want the queen,” carry laughing women from the crowd to the stage.  The entertainment committee gathers outside the women’s restroom, begging the contestants to come out, as the audience cheers for a fat, middle-aged woman who stands on the stage, wearing the crown intended for the winner and waving to the crowd.  The former chairman, the original intended beneficiary of the pageant, sits alone and neglected in the crowd.  Eventually, the firemen are distracted from trying to salvage the beauty pageant by the sound of a siren: cut to a community member’s farmhouse, burning to the ground.

The genesis of this chaos is trying to be and create something one isn’t and can’t: a group of firemen from a small Czech town attempting a replication of an international beauty pageant with themselves as the judges, with only a magazine and their own imaginations as blueprints.  While under the pretense of benefiting the community– they are, after all, the entertainment committee for this large gathering– they shift the focus away from what the partygoers might want and towards their own desire to be in control, to be the ones surrounding themselves with beautiful women at the mercy of their judgment.  The firemen are engaged in the pageant, but the audience is indifferent and the contestants are apathetic, then uncooperative.  While focused on trying to maintain control and conform to a specific prefabricated fantasy, the firemen forgo their true responsibility to the community, neglecting to respond to a fire alarm until a fire is out of control.  It’s a story that we see replicated time and time again in various institutions:  adherence to precedent and retention of power trumps purpose and critical thought.  Consider how recently, for instance, the Academy Awards nominations for 2016 yet again pass over innovative, critically acclaimed films and work done by people of color in favor of nominees who adhere more closely to conventional, traditional tastes and expectations.  Likewise, most of the films we see feature characters who exist within audience expectations and stereotypes.  Some films like The Firemen’s Ball make this dynamic part of their focus, but all films are influenced by it in their creation, distribution, and reception.