A rundown of fat characters in films I saw over the past month, but didn’t post about.

A French thriller set at a remote cruising spot, following Franck (Pierre Deladonchamps), who witnesses his favorite hookup Michel (Christophe Paou) committing murder.  Almost all of the characters in the film are men who have sex with men.  They are also mostly young and fit, with the exception of Henri ( Patrick D’Assumçao), a middle aged man with a beer belly who sits by himself and says that he is never propositioned for sex.  Only Franck approaches him for conversation, and their relationship remains platonic.

This incredible film documents a group of actors who gather in an abandoned Manhattan theater for informal rehearsals of Anton Chekhov’s play Uncle Vanya, under the direction of Andre Gregory.  Jerry Mayer plays Waffles, a sycophantic and persistently cheerful tenant of patriarch Serybryakov (George Gaynes).

I noticed two fat characters before Blu Ray took pity on us and malfunctioned.  Hoskins (Vincent D’Onofrio), who Doesn’t Understand the Dinosaurs, serves as a foil to Owen (Chris Pratt), who Understands the Dinosaurs.  His goal is to weaponize the raptors for military use.  When the Indominus rex breaks free of its enclosure, one of its first victims is a fat security guard, who is monitoring the enclosure but fails to notice that there is a problem.  His death is somewhat reminiscent of Gennaro’s in the first film: paralyzed with fear and hiding behind a Jeep, he remains motionless while the dinosaur destroys his cover and devours him. 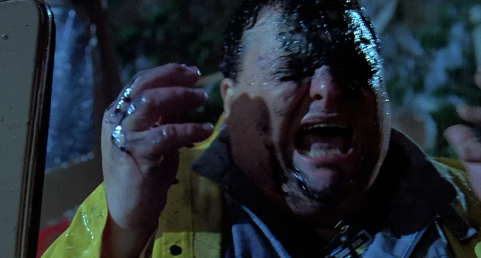 Dennis Nedry (Wayne Knight), a fat character from Jurassic Park. Also, a representation of what watching Jurassic World feels like.

A low-budget horror comedy about a group of college kids terrorized by a cursed turkey over Thanksgiving break.  Billy (Aaron Carlson) is the group’s fool, to borrow a term from The Cabin in the Woods.  He is a loose cannon redneck who makes more inappropriate comments than the other characters (with the exception of the Turkey).  He is introduced ripping his undershirt over his excitement for Thanksgiving break, to which Johnny the jock comments that he doesn’t want to see his “tits.”  Billy is the one who suggests that the group gets drunk in the woods after their car breaks down, and a research montage later in the film includes a shot of nerd Darren teaching Billy how to read.  Billy dies when Turkey tricks him into swallowing him, then bursting out of his guts.

A Pigeon Sat on a Branch Reflecting on Existence (2015, dir. Roy Andersson)

This film is a loosely connected series of static-shot vignettes that comment on mortality, morality, and human nature.  An opening sequence, “Three Brushes with Death,” feature two fat men who drop dead.  One dies in a ferry cafeteria; a second fat man takes his beer when the cashier points out that it’s been paid for and is up for grabs.  A fat dance instructor (Lotti Tornros) is inappropriately physical with a slender, younger male student (Oscar Salomonsson), running her hands over his body under the pretense of correcting his posture.  In a later scene, they are in the background having an intense conversation; he leaves her sitting at a restaurant table as she sobs inconsolably.  Another scene features a fat woman playing with a baby in a carriage.  Yet another is of a fat woman working in a laboratory, chatting on her cellphone while a confined monkey is tortured.  There is no narrative to speak of, but the most prominent characters are a pair of travelling novelty item salesman who are unsuccessful at their trade.  One of the salesman, Jonathan (Holger Andersson) is fat.  He is the more serious of the two and apparently the one in charge, describing his coworker as a “crybaby” and generally taking charge during their sales pitches.