Fatphobia is a complicated beast both in terms of genesis and expression, but in the USA, it is often partnered with the cultural preoccupation with self-improvement.  This country has a history that pushes to the forefront stories of people who better their lot in life through willpower, gumption, and a maverick spirit: wilderness pioneers, rags-to-riches entrepreneurs, social visionaries.  As inspiring as it can be, this idea of self-improvement often intersects with problematic ideas, such as the belief that buying the right product will be life-transforming, or improvements that tacitly require groups who have been fucked over by the aforementioned pioneers and entrepreneurs (and who the visionaries died trying to liberate) to assimilate into hegemonic standards.

As self-improvement focuses on an individual, its narrative is often written onto bodies.  Consider the popular and long-lived meme of “before’ and “after” photos in weight loss product advertising.  #notyourbeforephoto has been used by fat activists to rebel against this meme that positions our bodies as in need of fixing.  On the flipside, this article by a woman recovering from anorexia talks about the troubling co-option of photos of thin people living with eating disorders as “after” photos, deconstructing the idea that thinness equals health and happiness.

The diet ad meme is often pathetic in its transparency, ensuring that the subject is more neatly dressed, in better lighting, and wearing a happier expression in the “after.”  Despite the impassioned personal testimonies from activists and cheesy commercials that border on self-satire, the idea that the shape and size of one’s body equates to one’s mental and emotional well-being persists in popular media.  Two indie dramedies currently in theaters serve as criticism of the idea that a thin, athletic body is a sign of emotional and mental wellbeing. 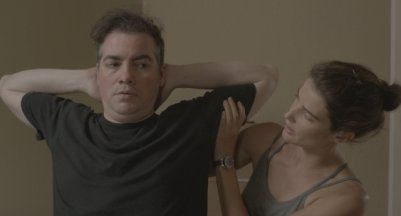 Results focuses on gym owner Trevor (Guy Pearce) and personal trainer Kat (Colbie Smulders), a mismatched pair who try to help client Danny (Kevin Corrigan) with his fitness goals.  At first blush, it seems like Trevor and Kat have their lives more together than Danny does.  Trevor is looking to grow his business and bring his fitness philosophy to the world; Kat is his star trainer and isn’t afraid to remind her boss of that fact.  Danny, meanwhile, is a schlemiel dealing with life-changing events that have left him single, alone in a new city, and a millionaire.  He describes himself as “pudgy;” his average body shape and below average grooming habits are more noticeable when compared to the athletic, clean cut gym bunnies who he constantly, if inadvertently, confuses.  Despite joining Trevor’s gym with the stated goal of wanting to be able to take a punch, we quickly discover that Danny’s life is largely empty and directionless.  He is socially awkward and uses his newfound wealth as a blunt tool to fix his problems, like making Craigslist posts offering hundreds of dollars in compensation for people willing to procure a cat for him and show him how to use his new tv.  However, as the film progresses, Trevor and Kat show cracks in their own well-toned walls.  Trevor, too goal-oriented for much self-reflection, makes a long trip to meet his fitness idol Grigory (Anthony Michael Hall), who criticizes his fitness philosophy and has no respect for him.  Kat’s caustic streak widens into near-chaos as she scrambles to figure out the next step in her own life.  Ultimately, none of them are in control of their own lives, and Kat and Trevor’s inability to untangle their feelings for each other shows their internal lives to be as messy as Danny’s.  To Danny’s credit, he is direct and honest, even if he struggles to express himself appropriately.

Welcome to Me follows Alice (Kristin Wiig), a woman who filters her struggles with mental illness through fad diets and the gospel of Oprah.  After winning $86 million in the lottery, she decides to go off her meds in favor of a high-protein diet, move into a casino, and fund her own talk show on an infomercial network.  Alice’s show, entitled Welcome to Me, is an expression of how she sees her world, and her role in it; she is both the brave survivor whose life stories are material for segments and the self-actualized host who dispenses wisdom and motivation.  The segments include dramatized re-enactments.  Some serve as a form of catharsis for Alice, giving her a chance to confront conflicts from her past in an environment that she controls, but others illustrate her belief that she is a role model to her friends and family, much like Oprah is for her.  One scene re-enacts her and her best friend Gina (Linda Cardinelli) shopping for bathing suits.  The actress Alice has cast to depict Gina is significantly larger than real-life Gina, and the scripted conversation filtered through Alice’s memory revolves around Alice coaching Gina to find the self-confidence to wear a two-piece.  This depiction offends Gina, who tells an uncaring Alice that she is comfortable with her body and simply prefers one-piece bathing suits.  The friend’s roles are reversed in their real lives, with Gina having been a steadfast support and guide for Alice since their childhood.  Late in the film, Gina delivers an impassioned monologue to Alice, telling her that her self-absorption and lack of empathy makes her a terrible friend.  Deciding to leave Alice, Gina cries in frustration,  “Fuck you for making me fat on your show!”  On the last episode of Welcome to Me, Alice apologizes to Gina and acknowledges how much she values her as a friend.  The episode includes a re-enactment of Gina being a source of emotional support for Alice during a difficult time in her life; this time, the actress depicting Gina is slender and petite. 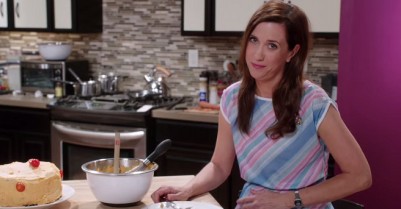 Both Results and Welcome to Me reach ambiguous conclusions: the protagonists grow as people, but still have long ways to go in their quests for happiness. There is a sense of contentment with this ambiguity, however, as the films show the inherent problems with the idea that self-actualization is easily and automatically obtained through a fitness philosophy or a high protein diet.  We’re all struggling, and nobody has a magic bullet to fix that, no matter how low their body fat percentage.